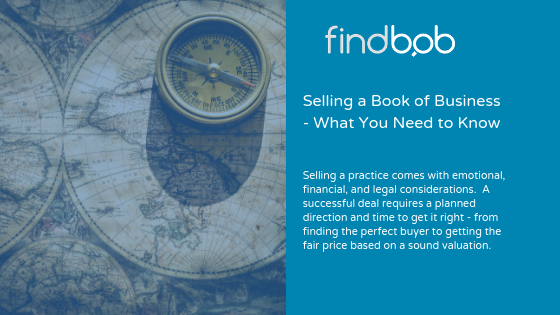 Selling a Book of Business - What You Need to Know

It's inevitable that one day you will need to leave your practice behind. It's a difficult thing to think about and accept, particularly when your business is thriving and you’re at the top of your game. In reality, though, retirement for an advisor is a very long process that requires a lot of advance thinking and work to get it right.

There is much we can learn from those who’ve successfully sold their book of business already – legally, financially, and emotionally there are things that every advisor goes through when executing their succession plans.

Sooner Rather than Later

Generally, though, those who do well for themselves will often have a multi-year, long term plan in place, says George Hartman, advisor coach, president, and CEO of Market Logics, and author of several books including Exit is Not a Four Letter Word. “Almost all of them say ‘I wish I had started planning sooner,’” he adds. “When I first started talking about this, everyone thought two years was a long time to plan. Now people are talking five to 10 years.”

Succession planning readiness can be broken down into three parts:

The emotional hurdle towards retirement is the first challenge to manage and often the largest to overcome.

The problem is further exacerbated by the fact that an advisor in his or her prime often doesn’t want to think about succession just yet, believing they are simply too young, too important, or having too much fun to even contemplate exiting the business. “I call them the Terrible Toos,” Hartman says. “It’s almost like the emotion people feel when they’re discussing life insurance or their wills. It’s as if somehow the discussion itself will precipitate the event.”

Similarly, some advisors can’t imagine what they would do in retirement without the office, the relationships they’ve built, the community recognition and the perks that come with being self-employed, and therefore won’t plan for a future they can’t envision.

Once you have made a solid decision to exit the business, the next question to ask is whether or not you’ve built enough wealth outside of your practice to maintain your lifestyle without it.

“Can you afford to retire? That’s a sad commentary when we’re talking about people who counsel others on their financial retirement, but the truth is many advisors maintain a very good lifestyle because they have very good cash flow.”

Finding your successor, meanwhile – the one you ultimately plan to get into a legal contract with – is surprisingly more difficult than it may seem at first. Despite the widely held assumption that the market for advisory practices is largely tilted in the seller’s favor these days, Hartman says the number one complaint he hears from retiring advisors is that they can’t find a qualified successor.

What’s more, he adds that over half of all first attempts at succession fail. Misalignment of expectations between buyer and seller, the death or disability of one party and major life events – divorce, death in the family, aging parents, etc. – are three of the biggest reasons why succession deals fall apart.

To navigate these uncertainties, a mindset shift may be beneficial: When finding your successor, think of it as a process, not an event.

“There’s always emotion involved, but approach it (your search for a successor) in as practical a way as possible," concludes Hartman. "Have a well-defined profile of your successor and have a structured process for identifying candidates, interviewing them and determining who is the most qualified.”